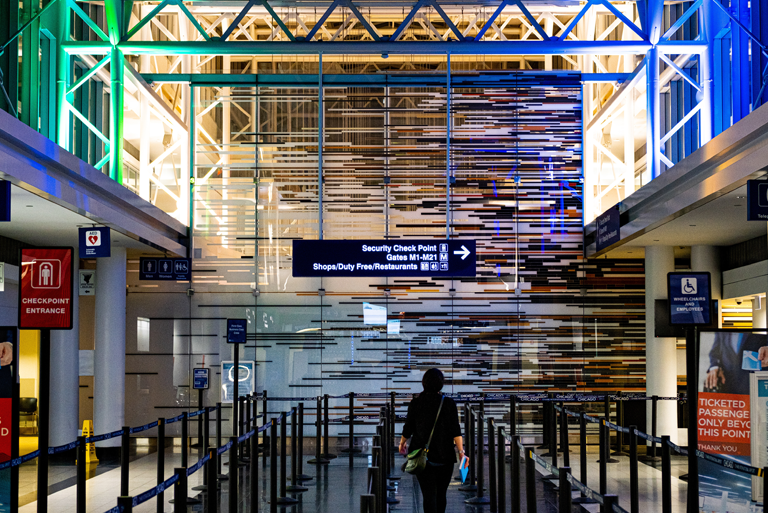 What Happens When You Lose Something at an Airport

When the realization slowly dawns on you as the plane door shuts and the engine starts. I’m sure we’re all familiar with the gut-wrenching feeling of realizing we’ve left something behind, especially at an airport. It’s no mystery to why we lose things at an airport. Airports are crowded, filled with thousands of people running left and right racing to navigate to their destinations. It can be chaotic and frustrating.

Sleepy, rushed, and distracted – it’s the perfect combination for forgetfulness. If you’ve flown on an airplane before, you know the drill. Take your shoes, belt, watch and any other item that could set off the body scanners. Take any electronic devices and toiletries out of your bags. Put everything into trays – electronics in one, jackets, scarfs and shoes in another. The average traveler uses up to 3 to 5 trays, making it easy to lose track of them.

Roughly 2 million people travel at airports across the country everyday, resulting in 90 to 100,000 items left behind at airports and security checkpoints each month. Whether you’re an amature traveler or a professional one – it can happen to anyone. The good news is, not only is it possible to retrieve your belongings from a security checkpoint. However, there are also ways to keep better track of them in the first place and avoid going through that kind of hassle.

Before diving into that, let’s talk about what actually happens to items left behind at airports and security checkpoints. In a previous blog, I discovered the truth about what happens to lost luggage. And how after a certain time period, unclaimed luggage is auctioned and sold across the country. What if I told you that items left behind face the same fate?

Your Left Behind Luggage at The Airport

When you leave something behind at an airport, it is either donated (auctioned) or destroyed. Unattended bags and luggage at an airport can pose a threat.  These anonymous bags will be inspected by airport security or police to check for explosives, weapons, or drugs. If an item such as an electronic or a piece of clothing is found, it will be sent to the lost and found department of the airport and held for up to 90 days.

Typically, it’s up to you to track it down. If your name and contact information is labeled on the object, there’s a chance you’ll be contacted about it, but it’s not common and I wouldn’t bank on it. After the 90 day mark, unclaimed items are auctioned or sent to charity.

Approximately 1,000 items a day end up in a 5,000 square foot warehouse managed by the lost and found department. According to the Airport Lost and Found website, only 15 to 20 percent of lost items are reunited with their rightful owner, and the rest of them are sold. Thankfully, there are ways you can avoid this kind of situation from happening to you.

Most Common Items People Lose at the Airport

While things from large amounts of cash, to prosthetic arms and legs, to sex toys have been discovered left at an aiport, there is a list of the most commonly forgotten items.

Belts must come off when going through the body scanners, or they will set off an alarm. Therefore making them another very common item lost and hard to pick out of the lost and found department.

Similarly to belts and glasses, phones and laptops are the next most common items that are commonly forgotten at an airport. Because they are in our hands and we need to remove them from our purses or backpacks, we can easily set them down to pick something else up and forget about them.

Tons of jewelry and specifically wedding rings make it to lost property. Unclaimed valuables are auctioned off in bulk, making one person’s loss, another person’s treasure.

Roughly 60 passports a month are found at airports. The issue is that once people have returned from their trip, they usually won’t notice their passport is missing until they need it next.

Sounds ironic, right? The most important things that go missing are the ones we rely on the most. To put it into perspective, in the span of just one year, airport security collected $926,030.44 in unclaimed money left behind by travelers. The money consisted of change and bills that were removed from passengers pockets and left behind in a tray during the screening process. The airports with the highest amount of lost items are:

What To Do If You Lost Something at an Airport

Surprisingly, few people make the effort to get their forgotten items back, especially if it was left at checkpoint securities on the X-ray belt or in a tray. Most accept defeat, especially if they left something at an airport in a different country if maybe they didn’t realize it was gone until after the trip. Here are a few steps to follow when making efforts to reuniting with a lost belonging:

Every airport has one, and if you can make it there in time before the 90 day mark, you may be able to find your lost item. Bear in mind that your item will not be alone in a lost and found section, and looking for your missing pair of prescription glasses may be like searching for a needle in a haystack.

In the event that you don’t notice immediately, head over to the airline’s baggage claim office. Typically, unclaimed items will be sent there once found.

As I mentioned earlier, there are things you can do to avoid losing your belongings. It seems as though no matter how many times I lose something – I never learn. Whether you’re a clumsy and forgetful person or not, stressful experiences can be distracting. Psychologists have studied this behavior and found that multitasking in an airport is much more complex than multitasking in our natural environments, such as our kitchens or bathrooms. While juggling so much and thinking about where to head to next, the responsibility of our belongings can easily slip our minds.

Protect your luggage with the help of FOUND ME

FOUND ME is a company that strives to help you with this issue. QR codes in the form of tag, labels, and stickers can be placed onto anything – laptops, phones, keys, passports, wallets, credit cards, and even your prescription glasses. When the QR code is scanned by an airport worker or even a good samaritan, it automatically connects them with you, the owner, through an automated and secure chat. Plus, it’s confidential and you don’t have to share or exchange any personal information that you don’t want to.

FOUND ME is global, and can enable you to speak with the finder of your lost belongings whenever, wherever, despite any language barrier. FOUND ME will automatically translate the chat to the language your phone is set in. Making it easier than ever to communicate.

This concept also enables you to contact the owner of any item you come across. Whether it’s at an airport, in a taxi, or on the street. The hassle of finding something and being hopeless and unable to return it is exhausting and frustrating.

FOUND ME works in everybody’s favor. Learn more about everything FOUND ME has to offer.