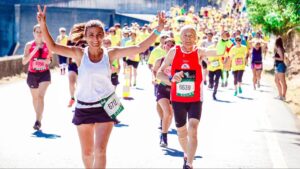 Can Running a Marathon Be Dangerous?

Are you a marathon runner? Or is this upcoming race your first one? Whether you’ve been running for years or you’ve just gotten into it, there’s never too much you can learn in regard to your health and safety.

Marathons are both thrilling and rewarding, but like any other sport, running doesn’t come without risks. A simple buildup of lactic acid can cause pain and muscles to cramp, leading a runner to collapse. An undetected heart condition can lead to serious medical emergencies. Too much water can lead to hyponatremia. Heat can lead to a heart stroke. There is so much that factors into running a marathon.

In this blog, we’ll cover everything you need to know as a marathon racer. With knowledge and simple tips and tricks to help you prepare and be aware of the potential dangers of racing a marathon, you’ll be ready to go!

Causes of Runners Collapsing During and After Marathon

There are several very serious life-threatening medical problems that can cause a runner to collapse, during or after a race. Any collapsed runner needs medical attention right away, so it’s important to listen to your body and get help. Many runners are overwhelmed with adrenaline and will not take collapsing after a race seriously. Knowing the various reasons why a runner may collapse during or after a race could potentially save a life, so it’s really worth learning. 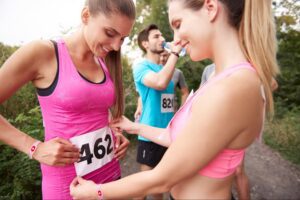 Race With FOUND ME

As the amount of training miles per week increases, so does the risk of injury. With such a large number of training miles to prepare for running a marathon, it’s not surprising that 29 to 43 percent of runners develop injuries during the training process. Exercise is supposed to make us healthier, and it does. But there are some medical conditions, aside from physical injury, that you are more likely to experience if you’re a runner. One of them being dizziness and collapsing. A runner may collapse for a number of reasons; it could be an undetected heart condition or simply going from a standing and running position to a laying down position. The medical term for this exercise associated is postural hypertension, also known as EAPH, and it’s common.

Thankfully, there are tips and tricks you can involve to help yourself if such a situation does happen to occur. FOUND ME offers rubber emergency bracelets that are comfortable and easy to wear. On the bracelet, a QR code will help just about anybody during an emergency. When the QR code is scanned, the scanner, most likely a paramedic or professional, will gain access to important medical information and history of the individual, including height, weight, allergies, whether the individual is diabetic or not, and any other information that may be helpful during an emergency situation.

The bracelet also holds something precious – it lets your loved ones know you’re in trouble. When the QR code on the bracelet is scanned, up to five emergency contacts are immediately contacted.